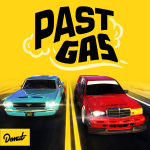 In the finale of our series on the Hells Angels, Joe, Nolan, and James see what the infamous motorcycle club has been up to in the 21st century. That's right, we're talking Modern Biker Warfare! We'll cover the Hell's Angels contention for turf in California with rival "MC", The Mongols, and talk about the clubs efforts to protect their legacy through litigation. We also dive into the Angles little known charity efforts, which include an annual toy drive for kids. You won't want to miss this one D-Holes!   Follow James on IG and Twitter @jamespumphrey  Follow Nolan on IG and Twitter @nolanjsykes  Follow Donut @donutmedia, and subscribe to our Youtube and Facebook channels! Learn more about your ad choices. Visit megaphone.fm/adchoices

Donut Media brings you some of the craziest stories from all of automotive history in their new podcast "Past Gas!". Hosts James Pumphrey and Nolan Sykes walk you through incredible stories behind your favorite cars and manufacturers, like underground Japanese racing clubs, bitter racing rivalries and how some of your favorite classic cars came to be. Remember, it's about cars, not about farts. Link to survey: https://bit.ly/2EcYbu4. For advertising opportunities please email PodcastPartnerships@Studio71us.com