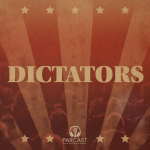 As he continued the family legacy of oppression, Kim Jong-un looked to show the world he was more than just a laughing stock. Not only did he flex his might by allegedly assassinating his half-brother in 2017, but he finally did what his grandfather had dreamed: he obtained nuclear weapons.

They are natural-born-leaders with a never-ending thirst for power. Through force and deceit, they rise through the ranks towards radicalism—eliminating anyone who stands in their way. Every Tuesday, delve into the minds, and motives, behind some of the world’s most infamous leaders in Parcast’s original series, DICTATORS. Each dictator is analyzed in 2-part episodes...with the first giving insight into their rise to power, and the second chronicling the impact of their downfall.