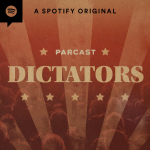 No pirate captain has captured the imagination of the masses like the one known as Blackbeard. From obscure crew member to fearsome legend, his very name evokes an image of the devil incarnate…  Learn more about your ad choices. Visit megaphone.fm/adchoices

They are natural-born-leaders with a never-ending thirst for power. Through force and deceit, they rise through the ranks towards radicalism—eliminating anyone who stands in their way. Every Tuesday, delve into the minds, and motives, behind some of the world’s most infamous leaders in Parcast’s original series, DICTATORS. Each dictator is analyzed in 2-part episodes...with the first giving insight into their rise to power, and the second chronicling the impact of their downfall.